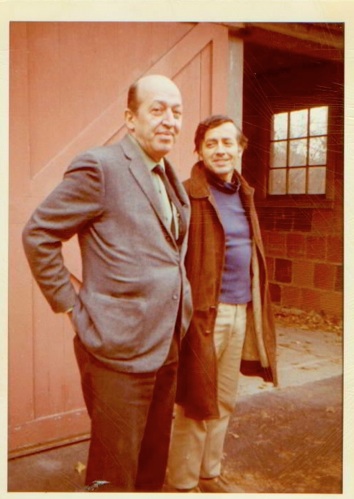 Friedel (Friedebald) Dzubas has been a superior painter for a long time. There are watercolor landscapes, done almost 40 years ago, whose limpid grays, grayed blues and greens ravish my eyes. Reminiscences of German Romantic art don’t take away from their originality, modest though that may be. Dzubas has always been original, in a surreptitious way that’s fooled everybody, including myself as well as such a good critic as Michael Fried. In his most discouraged moments Dzubas has remained—as we say in America—his own man. But it’s as though he’s tried to hide that, as though he’s tried to confuse the viewer—and himself too—on that scene [sic].1

At the end of the 1940’s he’d become part of the Abstract Expressionist “movement.” By the mid-1950’s he was ready to become one of its masters, a junior one, but a master nonetheless. That readiness is visible in the Dzubas of 1955 that the Whitney Museum in New York owns; it stands up to the Whitney’s Pollock and does more than stand up to its de Koonings and Kline. But it should have done still more than that. As Friedel himself recognized, he couldn’t keep himself from filling the picture out, fastening down all four corners of it with paint marks, when the whole urge of it was towards a certain emptiness on one side or the others, [sic]2 toward an indeterminate spaciousness. This boxing-in belonged to the notion of a well-made picture, from Cimabue and Giotto to Picasso and Pollock. (Even Hans Hofmann, in all the mastery he had won after 1950, still undermined many of his pictures with an excessive concern for the spelling out of their four corners.)

I pay special attention to this moment in the course of Dzubas’s art because it marked a “gran rifiuto.” Then and there, in the mid-50’s, he might have risen still more visibly than he did above the ruck of Abstract Expressionism in its dying throes. Not that he didn’t do good painting then and all through the later 50’s, but he didn’t drive it home, and didn’t make the fact that he was going against the tide—as he was—more evident. Then and there he could have entered the Promised Land with great, not just good, paintings.

He went along, eventually, with the linear, “hard-edged” art of the 1960’s, again producing good works, some of them may be [sic]3 better than before. At several group shows pictures of this [sic]4 startled me in the way they stood out, but each time I failed to recognize the picture as a Dzubas, for all my familiarity with his art. (Thus his canvas in the Guggenheim Museum’s collection in New York, which is one of the very best postwar items that the museums owns.) The value of a work of art doesn’t depend on the recognizability of its source, of course. But in Friedel’s case this lack of recognizability spoke for a failing on his part that lay in the failure to follow up his achievements and achievedness, the failure to put them together. He let it all lie scattered as it were. It was as though he was reluctant to take himself seriously, to settle into the way of success (I mean real artistic success, not the worldly kind). It was a though he wanted to stay in a state of promise, as though fulfillment, success, and all that would close out his options, take away the disponibilité of promise. And as it happened, and happens, people who did see how good Dzubas’s art could be did somehow sense his attitude towards himself and did therefore hesitate to take his art more seriously than he took himself. That is, they hesitated to conclude anything about the value of his art or his stature as an artist. I presume to say that it’s his own fault, almost entirely, that he hasn’t been a world-famous artist these twenty years back.

Well, all this changed with the beginning of the 1970’s, or has been on the way to changing since then. I wouldn’t want to say whether Dzubas is linear or painterly (malerisch) by native inclination. But I do say that there’s a vein of the malerisch deep inside him and that vein, after being more or less suppressed during most of the 60’s, finally and forcefully welled up in 1971. That was sudden. But it didn’t overcome his linearity; instead, a synthesis formed (to use Kenworth Moffett’s term). Dzubas had no conscious say in the matter: the synthesis just came. From that synthesis has issued the ripest and most consistently successful, and certainly the most original art he has produced. That’s saying a lot. Friedel has settled into his enduring self.

He used to wonder whether these new paintings of the 70’s didn’t look a little “old-fashioned,” too 1950-ish, out of phase with the times. Who cares? Artists will bother themselves about things like that. So Monet’s “Lilly Pads” were out of phase with the 1920s. (Curious: some of Dzubas’s newest paintings run into Monet. I say “run into” advisedly; it’s a case more of convergence than of influence; the malerish in Duzbas insists on itself more and more, to break up shapes, and to break up background too.)

But I don’t want to put too much emphasis on these pictures of the 70’s. Pictures from all stages of Dzubas’s art since the 40’s will in time to come thrust themselves increasingly into attention: enough of them to establish him once and for all where he belongs, which is on the heights. The art press, Kunstkompass, and other such awful manifestations of art-world opinion don’t indiate that yet. So what? Had Kunstcompass been present around 1900 it would have shown ever so many artists as ranking above Cézanne in point of popularity and exposure, not to say journalistic attention….

In the meantime I’m waiting for some more of Friedel’s dark pictures. His command of gray, black, and of hues that approach these is unique in my opinion. But he hasn’t yet let himself go full-blast in that direction. It’s as though he were waiting, again, to be possessed—possessed by himself even more than he is now.

Clement Greenberg, “Friedel Dzubas,” Friedel Dzubas Gemälde (exh. cat., Kunsthalle Bielefeld, Bielefeld, December 18, 1977-January 15, 1978), 7-9.  This is the first publication of the uncollected piece since 1977. Permission to publish Clement Greenberg’s 1977 essay “Friedel Dzubas” in its entirety was granted by Janice Van Horne, who graciously shared with me her fierce intelligence in a frank discussion of the relationship between her late husband, Clement Greenberg, and the artist. I extend to her my heartfelt thanks for her generosity on all counts. [—P.L.G.]
1.  In the typescript of essay, Greenberg originally ended the sentence after the word “too” with a period, but then added two dashes and “on that score.” The published version, which appeared in the catalogue, was paired with a side-by-side German translation by Eleonore Winter, with German on the left and the original American on the right.↑
2.  Greenberg blackened out what he had originally typed and handwrote “one side or the other,” to be inserted in the sentence.↑
3.  Greenberg has typed “maybe.”↑
4.  Greenberg has typed “his.”↑
5.  There is no date in the typescript, but the letter to Dzubas accompanying the typescript carries the date November 9, 1977.↑
Tags: AestheticsArtClement GreenbergFormFriedel Dzubas

What is Post-Formalism? (Or, Das Sehen an sich hat seine Kunstgeschichte)