Editor’s note: this is a response to Jameson’s Antinomies of Realism, published on nonsite.org.

I’m grateful for this symposium on Antinomies, not least because of the varied backgrounds reflected in the commentaries. In particular, it is good to know that it is interesting, but still more so that it is useful, as the discussions of Eliot scholarship and of realism in painting seem to demonstrate. As far as I’m concerned, the negative comments are helpful in showing me what I haven’t kept up with in newer theorizations and as indices of the Zeitgeist, something one always wants to remain in contact with, even when moving further and further into the past, as this book does.

Antinomies is not a monograph but a theoretical exercise or essay; and I’m rather proud of the way in which my exhibits touch in turn on all the major national languages in the Western realist tradition, from Russia to the U.S. I’ve written elsewhere on major achievements in Danish, Polish and Finnish literature, so I don’t think I can be accused of great-power bias; but there certainly remain questions of exclusion: where is Stendhal in all this, for example? (Dickens is implicitly touched on in the discussion of first-person narrative, inasmuch as he was a kind of actor who essentially wrote scripts for his own performances.) But other exclusions (and inclusions) had a more practical point to them: The entire English tradition was omitted, for example, as a pointed reminder that there are other languages and literatures (sometimes even more important) in the world and in history. I began with Zola in order to restore his always ambiguous reputation and his extraordinary achievement (it is after all the naturalist novel which was the great world-wide influence and not Balzac or Jane Austin or Goethe, however dear they may be to some of us); and I placed Galdós at the very center in order to deprovincialize our standard canon and to win a little more interest in this immense figure (and in Spain itself, normally reduced to prologue or one indispensable prologue or footnote—the Quijote—in our literary-historical stereotypes). And of course there is the absence of that great enigma who is Dostoyevsky. At any rate, the theoretical sketch I offered was not without its polemic digs and conspiratorial innuendoes.

What I want to comment on here, however—what this symposium made most painfully clear was my failure more fully to clarify or even identify my fundamental philosophical positions (not that the book needed to be any longer). I will therefore sketch three of them in: the matter of “empty consciousness,” whatever that means; my own take on affect; and the missing sociological (or Marxist) dimension.

As far as the “explanation” of consciousness as such, I share Colin McGinn’s skepticism about its possibility. Dennett does not satisfy me philosophically (I have a study of him coming out in my next book, on allegory), and I don’t for a minute believe that neuroscience will ever achieve much more than a thorough-going mapping of that lump of meat which is the brain. So Kant’s unknowable skepticism about the soul (for him just another “thing-in-itself”) remains for me the only tenable position (and Derrida’s master’s thesis on Husserl’s failure to “ground” it seemed to me admirably paradigmatic).

The problem with Kant, however, is that for him presumably the soul was a good deal more than mere empty or existential consciousness as such: it included personal identity, the “ownness” of that unique subjectivity which is “mine,” and so forth and so on. Those matters need to be radically separated from this so-called “empty consciousness” (I hope I didn’t use this deplorable expression as much as some of these commentaries suggest, but there really is no word for it and there cannot be, since it is not a thing with properties, which one could enumerate, characterize, inventory, and so forth). For that, the unavoidable statement is for me Sartre’s first work, Transcendence of the Ego, perhaps the only one to survive the structuralist tsunami and the subsequent de-marxification and heideggerianization of the French intelligentsia, and a major influence on Lacan (and Badiou). Put simply, it posits a radical differentiation between “pure” consciousness—is that a better word than “empty”—or intentionality, as he calls it, and the rest of the ego—my personal identity, my sense of self, indeed, my “self” itself, etc. This is then the radical void into which eventually affect can seep; and it also has the merit of allowing us to sweep away pseudo-concepts like the omniscient or implied narrator. The other inelegant and repetitive word overused here is the term “meaningless,” which is not meant at all negatively and functions as a substitute for “contingent” (the theoretical reference being Barthes’ “L’Effet de réel”). I should add, as a counterpoint to this, that my comments on Balzacian allegory are not meant negatively either (and that no one lacking an addiction to Balzac can really be counted as a lover of the novel, or even its roommate, as Michael Wood memorably put it).

Now as to affect, I made it clear that I had no intention of intervening in present-day debates and discussions of this interesting and henceforth omnipresent term. What needs to be understood about my distance from those polemics is that I still believe in the binary opposition, and am in that sense, I guess, some kind of structuralist Hegelian, or better still, that I include Hegel in Marx and structuralism in the dialectic. “Oppositions without positive terms”: such was Saussure’s great formula, his reinvention of the dialectic on a linguistic basis. Concepts do not exist in isolation, they are defined by their opposites: it is a dialectical lesson as well as a structuralist one, and in the best of worlds the latter should lead back to the former, which it reinvents in a new and contemporary way. Unfortunately, in Antinomies you only get half of this opposition, and it is that incompleteness which has led to some of the dissatisfaction here, I think. For I define affect as a kind opposite to emotion, or rather to what I stubbornly insisted on calling the “named emotion,” without making very clear why I did so. For in my perspective the emotions form a kind of semiotic system (like colors for the cultural anthropologist), and they are reified by way of their names. The system of emotions, then, is for me an allegorical matter, and will form the centerpiece of my next book (sorry for these personal forecasts). At any rate, in that sense Antinomies is necessarily incomplete, even though I tried to mark the place of emotion in my discussions of affect. But this is also the sense in which for me most discussions of both things are not altogether satisfactory: the discussions in queer theory of affect as well as the discussions of emotions in such admirably scholarly work as that of Amélie Rorty on emotion, or the more moralizing and liberal approach of Martha Nussbaum to such matters. We need to think of the named emotions as a kind of historical system, like that of the humors (to which they are so intimately related). But enough of this unfinished business, which is certain (rightly) to irritate some readers.

And now, finally, the historical basis of all this. Where is the marxismo? I remain, to be sure, a socialist and a rather orthodox Marxist (who still believes in the falling rate of profit, let alone class struggle and all that), but you won’t find much of that here, where the literary focus seems much closer to the metaphysical Theory of the Novel than to the political History and Class Consciousness, let alone Lukacs’ later theory of realism; and this is certainly a matter of embarrassment for me who find myself apologizing for Antinomies as something of a structuralist experiment. But after all, there are mediations to be considered. First of all, bourgeois culture (including its characteristic product, the novel) is a class culture which does not really exist any longer in our part of the world (see Franco Moretti’s recent book, The Bourgeois): indeed, you can have class without a class culture as we currently do. I seem to single out one lone feature of this once new culture, and that is the development or emergence of the bourgeois body, something that cannot really be defended except by time-travelling telepathy, insofar as we have never inhabited any of the others, let alone even this older bourgeois one. I will however observe that I do not merely evoke the body in some standard ideological fashion, but try to isolate and experimentally to observe its emergence in language: here it is language which is the sign and symptom of historical change and transformation, it is in the process of grappling with new language-problems that we can catch sight of this phenomenon, with the proviso that these are language problems quite different from those posed by the older nomenclature of the named emotions. A position of this kind ought to have led us on to the question (and the ideology) of expression as such, and maybe to its relationship to narrative. Certainly the rethinking of style—as has been so pertinently and admirably proposed here—is the beginning of wisdom: wish I had thought of it myself.

Fredric Jameson is Distinguished Professor of Comparative Literature at Duke University. The author of numerous books, he has over the last three decades developed a richly nuanced vision of Western culture's relation to political economy. He was a recipient of the 2008 Holberg International Memorial Prize. He is the author of many books, including Postmodernism, Or, The Cultural Logic of Late Capitalism, The Cultural Turn, A Singular Modernity, The Modernist Papers, Archaeologies of the Future, Brecht and Method, Ideologies of Theory, Valences of the Dialectic, The Hegel Variations and Representing Capital. 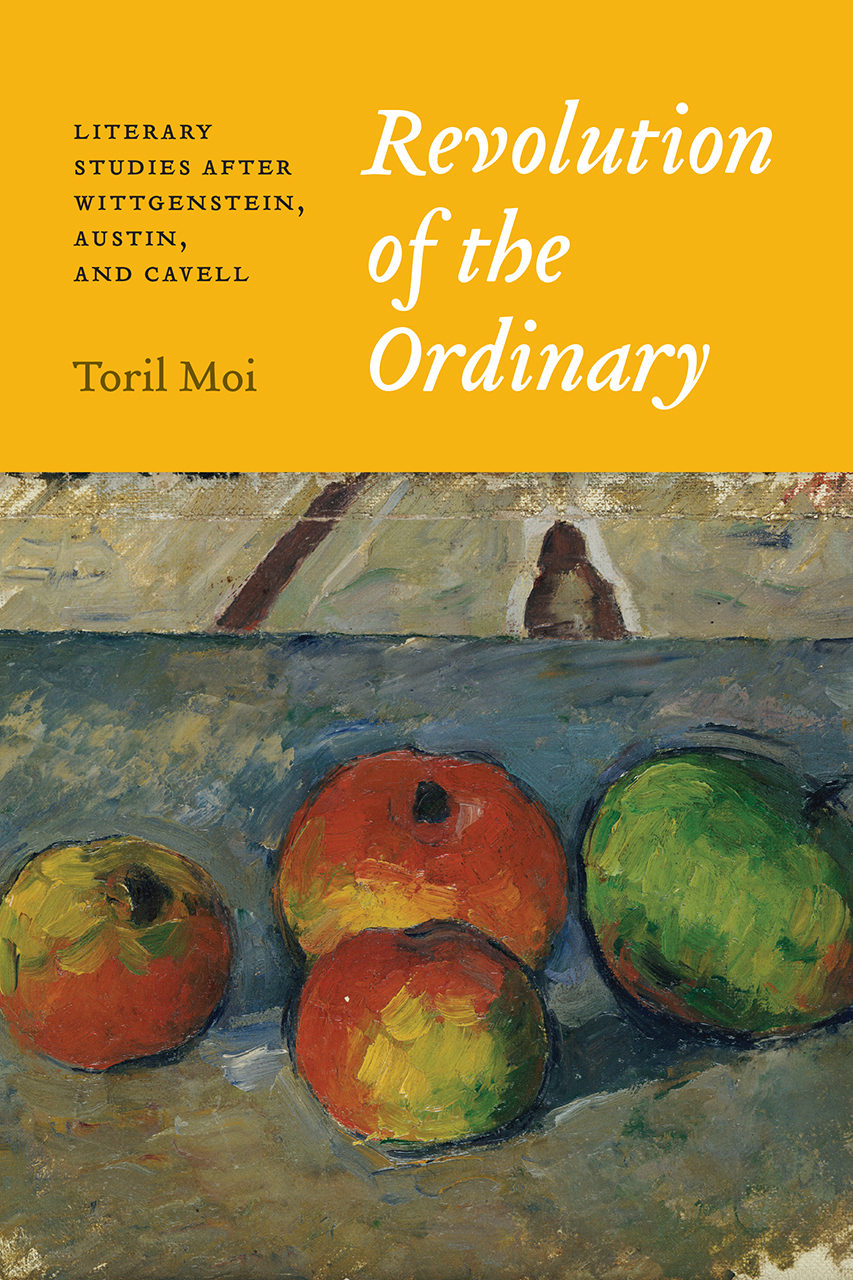 Revolution of the Ordinary: Literary Studies After Wittgenstein, Austin, and Cavell