Mazzocchi and the Moment 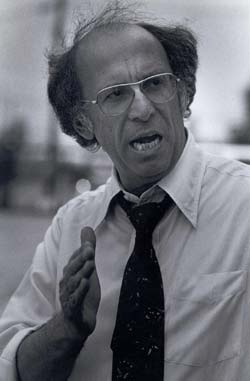 In recent months I’ve been thinking a lot, more than usual, of Anthony Mazzocchi, longtime official of the Oil, Chemical, and Atomic Workers International Union, leading presence in the movement for occupational health and safety, and one of the very brightest lights of a serious working-class politics in the post-World War II era until his too-early death in 2002. Tony often observed, regarding capital’s revanchist attack on working people that has steadily intensified over the last four decades, that what we would now call the neoliberal Democrats had nothing to offer those who have been or fear being ground into the dust by the juggernaut. He cautioned that, if the left and the labor movement didn’t find ways to connect with that growing population of those hurting and to offer credible explanations of the sources of their condition and plausible strategies for fighting back, other, nasty and dangerous tendencies would. That perspective reflected a deeper view of politics that guided the thousands of us who, for nearly all the 1990s and most of the first decade of this century, struggled to articulate and advance an unambiguously working-class politics through the effort to build an independent Labor Party, of which Tony was the “Founding Brother” and animating force. In the 2015 issue of the Socialist Register, Mark Dudzic and I laid out an assessment of the state of the left and labor movement in the U.S. and the challenges that face us that is rooted in that perspective.

So here we are. I know that Tony wouldn’t take any pleasure at all in being correct, but Christian Parenti’s thoughtful rumination on Trump’s working-class support underscores just how much he was. Since Tony’s death, the Democrats’ failure to address working people’s concerns and interests has, if anything, gotten worse. Democratic neoliberalism has generated its own version of a left wing that not only has little place for the working class; it even denigrates them. Watching any random episode of “Real Time with Bill Maher” makes that clear. But I’m not talking only about the “white working class” that has become a hot topic for long-distance psychoanalysis via parsing exit polls and attitude surveys and faux ethnography. Black and other nonwhite working people have been disappeared into categories of ascriptive identity, as have their female and LGBTQ counterparts.

That disappearance is the real takeaway from the persisting complaint during the campaign for the Democratic nomination that Bernie Sanders was inattentive to black Americans’ concerns. No amount of pointing out that every item in the Sanders platform would disproportionately benefit blacks, other nonwhites, and women could penetrate the posture of complaint. To some extent that was because the complaint was either a smokescreen for commitment to Clinton or a stratagem of the familiar hustle of “attacking targets most likely to be sympathetic and kicking in open doors to demand voice or standing not justified by links to actual constituencies or demonstrated political capacity.” It was also, however, an expression of the idea, as historian Judith Stein put it “that the highest item on the black agenda must be something uniquely for blacks and that racial disparity is the only disparity that counts.”

As Stein points out, Democratic neoliberalism “never aimed to strengthen the working class, only to provide opportunity to leave it.” That opportunity can be for individuals only, and the implication is that those who fail to take advantage of it are in some way or other defective. But the view that expanding opportunities for individual upward mobility can create a just, or even a generally acceptable, society is only a convenient fantasy for the New Democrats whose class commitments don’t include working people. There is no capitalism without a working class, and there can’t be. And a politics built around dismissing or disparaging economic concerns of the working class—of all races, genders, and sexual orientations—in favor of counter-solidaristic discourses of “privilege” and disparity,1 while depending on working-class votes, is vulnerable to exactly the kind of reactionary tendencies Tony Mazzocchi warned about.

The most immediate challenge we face now is to prepare for what is going to be the political equivalent of a street fight that we’ll have to wage between now and at least 2018 just to preserve space for getting onto the offensive against the horrors likely to come at us from Trump, the Republican congress, and random Brown Shirt elements Trump’s victory has emboldened. At the same time, however, we need to reflect on the extent to which progressive practice has absorbed the ideological premises of left-neoliberalism. Defeating these reactionary tendencies will require crafting a politics based on recognition that the identity shared most broadly in the society is having to or being expected to work for a living and that that is the basis for the solidarity necessary to prevail and, eventually, to make a more just and equitable society.

1.&nbspI’d like to thank Jamelle Bouie—e.g., http://www.slate.com/articles/news_and_politics/politics/2016/11/the_democrats_are_already_screwing_up_the_trump_resistance.html and  http://www.slate.com/articles/news_and_politics/politics/2016/11/there_is_no_such_thing_as_a_good_trump_voter.html—for his no doubt unintentional yet nonetheless wonderfully apt response to Jonah Birch and Paul Heideman’s contention that “there is little evidence to support the notion that movements and campaigns organized around ‘antiracist’ demands block the emergence of class-based, universalistic movements.”↑
Tags: Anthony MazzocchiClassNeoliberalismPoliticsRace