Of All the Things to Say about Mayor Pete 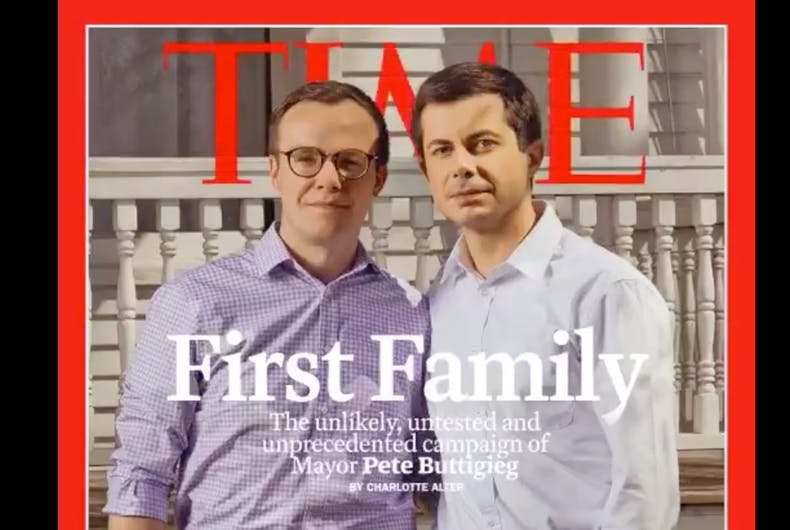 Greta LaFleur’s recent LA Review of Books Blog offers a reading of the Time cover depicting South Bend mayor and presidential candidate Pete Buttigieg in a pose with his husband, Chasten (who took Pete’s surname). “There’s a lot to look at in this photo,” she begins, and goes on to discern there the following elements: evocations of Norman Rockwell’s Americana; “a profound story about whiteness” (the couple is white, as are the balusters and the house behind them: evidence, argument, and conclusion); the deployment of pernicious “forms of power,” specifically displays or practices that “weaponize the immaterial power of whiteness;” and a family-values-resonant antidote to “queerness.” In a modest twist on the prevailing LGBT Studies storyline, she concludes that the photo is less an embodiment of “homonormativity” (models of gayness that reflect a supposedly middle-class consensus of how gays might ought to behave in public in order to be good political subjects) than of heteronormativity. The couple’s rather stiff pose, she concludes, represents “heterosexuality without women.”

No doubt, the historical markers of race, gender, and sexuality are in flux. And certainly, we have arrived at a moment when all manner of signals and markers will be scrutinized for their racial, gender, and sexual content by alert media critics and academics hoping to bring their expertise to the deciphering. But rather than really reading the photo, in its odd nuances and ambiguities, LaFleur rehearses a line of argument that takes such categories as queerness and whiteness as givens, which now have somehow become “detachable” under late capitalism rather than fixed to actually queer or white people. (She credits analysis of this “detachability” to an essay by my former student, Ana Ramos-Zayas.) That is, on LeFleur’s line of argument, “non-white” people can now deploy “whiteness,” “queer” people deploy “straightness,” and so on.

In the Latin American models from which this argument is drawn, most people plausibly embody a mix of historical whiteness, indigeneity, and blackness, of status and derogation—which they exhibit under different circumstances, either by will or under external compulsion. There’s nothing new about the contingent deployment of identity-markers or the successful or unsuccessful staking of claims to identity. Social identities are always constructed, contingent, and somewhat fungible. See, for example, my chapter, “The Negro of the Family,” which shows how Nicaraguan mestizos (mixed-race people) parlay the signs of whiteness, or are enjoined to blackness, under varied circumstances. This is not only true in Latin America. Similar moves have long histories in the United States.

Whether these everyday displays and petty power-plays rise to the level of significance for capitalist political economy or whether they represent the grim personal-life reverberations of colonial histories is a matter of interpretation. Scaling up these everyday practices is not a straightforward matter. It might seem logical that practices of covering (see Kenji Yoshino), passing, and so on, by dint of repetition and pervasiveness, amount to strong elements of the capitalist political economy. But such an argument becomes difficult to sustain at a time when “woke” capitalism fully embraces multiculturalism, minority empowerment, and other forms of celebration and inclusion that pose no threat to the bottom line. In other words, it appears implausible when (at least for members of a certain privileged social class) not passing and not covering also claim coveted positions in the capitalist political economy.

I’m more struck by the demand for something like authenticity, which the author cannot quite name as such but affects by a kind of extortion. This method of exaction has become more or less routinized in LGBT Studies, and along with it, the substitution of ethical imperatives for political ones. In LaFleur’s piece, as in other works, one finds less deductive arguments than associative logics where free-floating in labels like “heteronormative” and “homonormative” (and often “homonationalist”) are applied, sometimes willy-nilly. If social actors deviate from a prescribed course (which is never quite carefully spelled out), their actions become subject to verbal sanction. The author will say or reveal something unsavory about the actor, his penchant for straight-looking clothes or perhaps her desire for a “traditional” marriage.

I have gradually come to be suspicious of this sort of language. For one thing, it pretends to be against disciplinary or coercive culture while bringing into play a series of whips and cudgels that have disciplinary force. It judges a person’s private actions or predilections by public standards. But perhaps more importantly, it reflects a fantasy version of gay life. No one in the real world would want to take on the full weight of anti-normativity, which implies social exclusion (the No Future version of queer life expounded by Lee Edelman). No one wants to inhabit this existential queer position—a pure and terrifying unassimilable abjection—cooked up in the heyday of queer theory, the better to dramatize the force of sexual stigma.

Or better yet, we should say: these positionings continue to have appeal for academics, who are often relatively well-off at elite universities, who have the leisure to pose and play at abjection. Their work distills a schizophrenic desire: they want to run free with the wolves while howling in protest against their exclusion from society. But the authors are in fact very far removed from the lives of the most oppressed and marginalized, who they take as their models and who they purport to represent. This ought to give more pause than it does. Such is the LGBT version of the POC-PMC hustle, about which Adolph Reed has written.

Certainly, some want to live the life of spectacle or ultra-sex or glam. This is a real phenomenon (albeit this is likely the late capitalist phenomenon, associated with sex clubs and circuit parties and other forms of conspicuous sexual consumption and commodification). Or some of us are forced into truly abject positions by default: criminal queers, sex offenders, some trans people, and so on. But most gay people aspire to blander dreams than the queer theorists admit: a stable relationship. A sense of connection. A decent home. A boring secure middle-income life with someone. Dare one say decent health care? Can we stop trying to label these commonplace desires as “white,” “normative,” “elite,” etc.? These are just your ordinary working-class aspirations, things most people want as soon as they get some sort of stable ground under their feet. We should not confuse these with desires to lord it over nonwhite people or to claim sexual privilege.

Finally, it takes a lot of work to see these two drably-clad men as representing either heterosexuality or power. They look like lower-level office workers in any American city. But LaFleur proudly discounts ideology or politics in her reading and stakes everything on identity. Politics will be the representation of identity, of sectoral interests, rather than pursuit of a common good.

This [blog] is not a campaign against Pete Buttigieg (or for him, either; I literally have no idea what he stands for, or doesn’t), and I’m also aware that my least informed guess is probably the right one: that the office of the presidency is so totally bankrupt of positive political potential that in many ways it doesn’t actually make a difference who captures the democratic nomination. But it does seem interesting that as the potential of women candidates (Kamala Harris, Stacey Abrams, and Elizabeth Warren most immediately) to secure the Democratic nomination seems to be waning, Pete and Chasten appear on the cover of Time. And perhaps this is heterosexuality at its immaterial and strategic best, a heterosexuality that could take back the Presidency for the Democrats: white, centrist, and without women.

On this basically by-the-numbers reading, a white gay male couple can only represent the white patriarchy. This is the identity politics vulgate at its worst. A dash of know-nothingism is thrown in for good measure: It probably doesn’t matter who we elect.

My own view of the photo is more mundane. It is the stiffness, the discomfort, that I cannot help but see. I want to say, “You are really trying not to spook the straights, but anyone who is truly homophobic will see that you are in fact two men, thus homosexuals, and will then begin to surmise who throws his legs up in the air in bed.” Or, where LaFleur sees Ralph Lauren, I want to say: “You got those Everyman middle-income get-ups at Gap, didn’t you?” I also think that Pete and Chasten are both turning paunchy and could hit the gym. (Now there’s your gay reading, for better or worse.)

But exercises in this sort of photographic reading admit no stagings that would ever pass muster. What if one were dressed as a leather daddy and the other as a drag queen? (Hetero-similitude!) What if they were more passionate in their embrace? (See how that Gore couple kiss played in 2000: fakers!) What if they had chosen bolder colors? (Hillary Clinton’s sartorial choices for the 2016 debates were subject to endless criticism.)

And now I look at a few pictures of my own partner and me: they’re almost inevitably uncomfortable, awkward. This is especially so when the photos are taken in public places. As hard as it is to capture an intimate moment in photography, it’s doubly difficult to do so with people who have been trained to not be demonstrative in public: to cover, to pass, and so on. Performing a sense of ease in your own skin is impossible save for the best of actors.

But these are my photos, and they are important, yes—for me, and for my love. They are not for you, and how we face the choice of being either “straight-acting” or “flamboyant” is our business.

Let’s stop bogging down the political conversation in these terms. Photographic performances should not be subject to the same kind of scrutiny as, say, policies that put working-class people out of their homes or turn the screws on the poor. We need less attention to acting, visuals, or performances of identity and more attention to ideas, ideology, and politics. Otherwise, it really won’t matter who wins the presidential election next year.

Of all the things to say about Mayor Pete, complaining about the staging of his photo shoots is the least important. What’s wrong with Buttigieg isn’t his performance of identity, but his apparently more-or-less complete devotion to capital. That devotion bodes ill for working-class people of all races, sexual orientations, and genders.

Postscript: on Some Responses to “Would Vanessa Place Be a Better Poet if She Had Better Opinions?”