On Catherine Malabou’s What Should We Do with Our Brain? 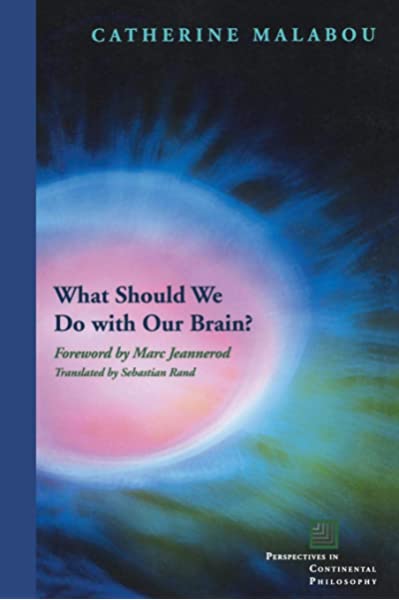 In her book What Should We Do with Our Brain? (Fordham University Press, 2008) Catherine Malabou suggests that that we have not yet assimilated the revolutionary discoveries made in the neurosciences over the last fifty years. She shares with the French neurobiologist Pierre Changeux the idea that “neuronal man” has no consciousness of his brain, with the result that “we are still foreign to ourselves . . . ‘We’ have no idea who ‘we’ are, no idea what is inside ‘us’” (3). Above all, we have failed to grasp the constitutive historicity of the brain, a historicity that is “really nothing other than its plasticity” (4). As she puts it: “Our brain is plastic, and we do not know it” (4). “What must we be conscious of (and not merely acquainted with) concerning brain plasticity? What is the nature of its meaning?” (9) Malabou asks, and replies: “We will respond, without playing on words, by saying that the consciousness we want to raise on the subject of plasticity has to do with its power to naturalize consciousness and meaning” (9).

Malabou’s book thus has something in common with other recent attempts to naturalize contemporary politics and culture by linking them to the brain sciences. She also shares with many scholars a burgeoning interest in the phenomenon of the brain’s plasticity. But what does her argument amount to? This is what she says: There is a plasticity to the brain, which people have mistaken for “flexibility.” The true potential of neuronal man has been missed because the neo-liberal world of global capitalism endorses the idea of a flexible, de-centered, networked, yet docile neuronal man. Neuroscientists such as Antonio Damasio, Joseph E. LeDoux and others are valuable because they have explained the nature of neuronal man. But they are also mistaken because, while accepting the fact of the brain’s plasticity, they have misunderstood its potential for indeterminacy and creativity in the formation of the self by subordinating the fact of plasticity to the notion of flexible adaptation and biological survival. Above all, they have obfuscated the difficulty of theorizing the transition from the neuronal to the mental. The challenge for us is to accept the position of neuronal materialism without succumbing to a false reductionism and hence for us to find a way to think through the transformation of the brain’s plasticity into the mental, into “freedom.” The goal of Malabou’s analysis is thus to show us how knowledge of the plasticity of the brain can help us realize our (or our brain’s) potential for freedom and creativity. She suggests that to ask “What should we do with our brain?” is to “refuse to be flexible individuals who combine a permanent control of the self with a capacity to self-modify at the whim of fluxes, transfers, and exchanges, for fear of explosion” (78) and instead to “visualize the possibility of saying no to afflicting economic, political, and mediatic culture that celebrates only the triumph of flexibility, blessing obedient individuals who have no greater merit than that of knowing how to bow their heads with a smile” (79).

It is hard to assess Malabou’s proposed solution to the mind-body problem, or to the problem of the transition from the neuronal to the mental, because it is offered as the merest sketch. Her way out appears to take the form of some sort of deconstructive move, though Derrida is not mentioned (Malabou previously co-authored a book with the philosopher). Her message seems to be that there is difference in the same and that this is good. There is difference in the same because there is always already the emergence and the disappearance of form, or the exposure of constancy to accident. Since according to Malabou this tendency to accident or change is ineluctable, we don’t have to worry about bringing about self-transformations or alterations or resistance. As she states, “every form carries within itself its own contradiction” and “precisely this contradiction, makes transformation possible” (71). Or as she also puts it: “The word plasticity thus unfolds its meaning between sculptural molding and deflagration, which is to say explosion. From this perspective, to talk about the plasticity of the brain means to see in not only the creation of form but also an agency of disobedience to every constituted form, a refusal to submit to a model” (6).

In short, Malabou claims that recognizing that the neuronal self is structured by difference or contradiction can solve the problem of the transition from the neuronal to the mental. “The transition from the neuronal to the mental supposes negation and resistance,” she writes. “There is no simple and limpid continuity from the one to the other, but rather transformation of the one into the other out of their mutual conflict. We must suppose that mental formation draws its being or identity from the neuronal, born of a sort of blank space that is the highly contradictory meeting point of nature and history”(72). (But do these words say anything? Don’t they just repeat the mind-body problem by suggesting that the mental emerges from the neuronal, or culture from nature, by virtue of a kind of gap or aporia? For the question posed is: how does this transition or emergence occur? ) Or as Malabou also puts it, “only an ontological explosion could permit the transition from one order to another, from one organization to another, from one given to another. The neuronal and the mental resist each other and themselves, and it is because of this that they can be linked to one another, precisely because—contra Damasio—they do not speak the same language” (72).

But this is almost laughable, we seem to be back to square one: the neuronal and the mental are—or “speak”– different languages. (And didn’t the philosopher Paul Ricoeur say more or less the same thing some time ago in his debate with Changeux? Yet Malabou dismisses Ricoeur’s position as “untenable” (82). I am not here defending Ricoeur, although it does seem to me that he repeatedly gets the better of Changeux in their exchange. I am only pointing out how little difference there seems to be in this regard between Malabou’s position and that of Ricoeur.)1

Everything Malabou goes on to say about the formative effects of energetic discharges and creative bursts in the brain that “progressively transform nature into freedom” (74) or about explosions (or types of “plastique”) that transform identity involves an appeal on her part to a metaphorics of the sort she deplores in the work of Damasio and others.

One of the most puzzling moments in Malabou’s book is when she quotes the neuroscientist Marc Jeannerod to the effect that the “biological function” of intentional action is not to maintain constancy but to generate new properties (75). In the central nervous system, Malabou writes, “the formative contradiction—formation/explosion—proceeds from a more original contradiction: that between the maintenance of the system, or ‘homeostasis,’ and the ability to change the system or ‘self-generation’” (74). She cites Jeannerod as stating in this regard that “‘the biological function of intentional action ought . . . to be investigated, not as maintaining a constancy, but rather as generating new properties . . . [O]nly a structure capable of self-generated activity could impose its own organization. Intentional movement thus becomes the means by which the organism and the environment reciprocally interact, and by means of which the subject constructs its own representation of the real.’” To which Malabou adds: “But this transition from ‘homeostasis’ to ‘self-generation’ is not made without rupture or gap” (75). It thus seems as if the very problem which is at the center of the mind/brain debate, namely, the nature of intentionality, is now being offered as the solution: the claim is that intentional agency just is the biological process that can produce the desired-for “gaps” or differences that characterize freedom.

1.&nbspJean-Pierre Changeux and Paul Ricoeur, What Makes Us Think? A Neuroscientist and a Philosopher Argue About Ethics, Human Nature, and the Brain (Princeton: Princeton University Press, 2000).↑
Tags: Catherine MalabouNeurosciencePlasticity

Ruth Leys is an Academy Professor at Johns Hopkins University, specializing in the history of the human sciences, with an emphasis on the genealogy of psychoanalysis, and the psychological, cognitive and neuro-sciences. Leys is the author of From Sympathy to Reflex: Marshall and His Critics (Harvard, 1991), Trauma: a Genealogy (Chicago, 2000), From Guilt to Shame: Asuchwitz and After (Princeton, 2007), The Ascent of Affect: Genealogy and Critique (Chicago, 2017), and editor of Defining American Psychology: The Correspondence Between Adolf Meyer and Edward Bradford Titchener (Johns Hopkins, 1991).