Some Passages from Virgil’s Eclogues

An Exchange of Gifts

where to sit down and start singing: whether

beneath these shadows, shook and shifted

by the wind, or in that cave

If you’ve got any valentines for Phyllis,

or praise for Alcon, or shit to say to Codrus,

go right ahead and sing it, Mopsus;

Tityrus can watch your grazing kids.

scratching them onto the green bark

of a beech tree, with all the modulations

for the pipe properly marked.

But before you call Amyntas

or anyone else to challenge me, listen:

“Daphnis died, and the Nymphs mourned him

watched them weep–while his mother, absurd

On that day, no one drove his pastured cattle

towards cold waters; no animal at all

drank from a stream, or touched a blade of grass.

And the wild hills and the rude woods

rumored that even the African lions

were moaning at your death, Daphnis,

who knew how to inspire a wine dance, or interweave

the mystic wand with softest leaves.

And since the Fates hauled you off,

and ugly cockle spurt up in the furrows

where we’d planted barley; in place

of soft violet and purple narcissus,

make shade by the fountain, and let’s crown

his tomb with a song: I am Daphnis,

famous from this forest to the stars,

more beautiful even than my animals.”

when one needs sleep, or a sweet rill

discovered in thirsty summer. Not just your playing–

a voice to match your master’s as well.

You’ll be the next him, after him.

Now here’s a small strain of my song, which finds

dead Daphnis at the fringes of the stars.

“Tentative at the threshold of Olympus,

under his feet. And, all at once, sharp pleasure

seizes the woods, the rest of this world,

shepherds, and Pan, and the Dryad girls.

The wolf abandons his nasty plan for the flock.

No nets will trick stags any more,

of olive oil, and I’ll brighten the banquet–

by my fireplace in the winter, or, in summer,

in the shade–with wine strained

into goblets out of strange nectars.

This will be your ritual, Daphnis, you’ll be recalled

every time we pay our contracts

to the Nymphs, whenever bloody sacrifice

cleanses these fields. As long as the boar

adores his mountain and fish live in streams,

as long as bees feed on thyme

and cicadas drink the dew, so will your name,

your honor, and praise persist.

Just as they do to Bacchus and to Ceres,

farmers will now vow wild things to you;

make them keep every last promise.”

What can I say, how could anyone repay

such a song? The south wind bustling

shaking the beach, or faint runoff down rocks

in glens–none have sounded sweeter to me.

What can I give you in return?

First, boy, for you: this tender

that learned to play the tunes “I’m not that ugly”

and “You beat Damon? You actually outsang him?”

Though Antigenes always begged me for it–

and this was when his looks deserved the gift–

I never gave it up. It’s pure brass,

crafted so there’s equal space between the knots.

Kings and complex battles–starting out,

I only liked a certain kind of song.

But then Apollo got me by the ear:

A shepherd should keep the flock fat

So now I woo a rustic muse on this compacted reed.

of poets begging to construct your epics;

it’s simply that I no longer sing

what doesn’t simply come to me.

upon famous Silenus, splayed out in a cave

and snoring, his garlands discarded,

still dangling from his fingers. They grabbed him

and tied him up with his own things–

for often the old man had teased them,

but they’d never gotten to hear him sing.

A nymph named Aegle showed up with mulberry juice

and rubbed it all over the poet’s face.

When Silenus woke and saw the trick, he laughed:

“But why keep me tied? You’ll get your songs,

and Aegle will get me whenever she wants.”

Then suddenly the great Silenus is singing.

You can see Fauns and fierce beasts

that can’t help shaking at the crown.

For Silenus sang first of atoms–

seeds of the land, sea, and burning planets–

gathered dancing across the deep; sang how,

from these elements, everything would grow,

even this young orb called the earth,

the land, and the clouds, he sang,

Unaware of where they came from

or what they were, animals

rambled across the mountain ranges.

how Prometheus ended up with fire,

the eagles that then fed upon his liver.

A song to comfort Pasiphae, relentless,

in love with a bull and doomed to wander.

A song to twirl bark and moss

around Phaeton’s sisters, turning them all

to weeping alders. A song recalling how Linus,

into the order, “with these same reeds

hard ash trees down from the mountains.”

And then the old story of Scylla,

monsters growling out of her bright groin

as she seized the Ithacan ship and made it shake

until, in the sea’s swirling depths,

her dogs had ripped apart each fallen sailor.

Or the legend of Philomela,

one day preparing for a wedding feast

then returned, horribly, a bird,

hovering above the roof of her old home.

Every kind of song that Apollo knows,

that the river Eurotas ordered its laurels to learn:

the valleys reverberate with them now.

And though the evening star–it was time

to drive in and count our sheep–

had begun to sweep through the reluctant sky,

Silenus could have kept singing.

Daphnis chanced to be just leaning back

beneath a particular whispering holly

when two shepherds arrived together,

Thyrsis leading his sheep, and Corydon

with his swollen goats: two boys

in bloom, Arcadians each, eager to sing

and listen and match each other’s singing.

And it happened that, as I was wrapping

crape myrtles against the coming cold,

my he-goat wandered away from his wives

and ended up beneath this same holly tree.

Chasing after him and my scattering flock,

I bumped into Daphnis. “Take a minute, join me

beneath this shade. Your goats will be fine,

your steers will guide themselves to these slack waters

where low reeds meter the banks

and the holy oak thrums with honeybees.”

And why not stay? I had no slave at home

to watch my just-weaned lambs,

but I weighed the value of my work

against this chance at play, this once-in-a-lifetime

contest of Thyrsis versus Corydon.

And so, switching verses, they began to sing,

as the Muses commanded the lines to come.

than sleep, my strawberry tree’s

from this noon heat. Buds are swelling,

insipid summer’s coming. I can tell.”

“Here where the doorpost gathers soot

around the tang of smoky pitch,

a fire’s always going. We fear the winter

as much as a wolf troubles to count a flock

or a torrent bothers about its banks.”

“Majestic junipers straight up and down,

prickly chestnut trees, and under each a skirt

But if my Alex abandoned these hills,

you’d see the rivers themselves dry up.”

“The fields are parched, grass sucks

at the tainted air, Bacchus has wiped his vines

from every hill. But when my Phyllis

comes back, each tree will go green again.

–And that’s as much as I remember:

That was the day Corydon became Corydon. 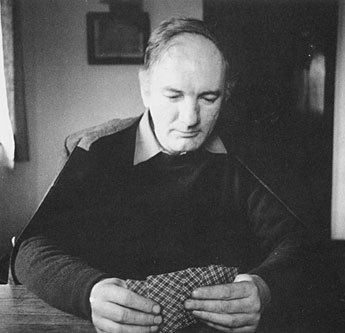