Policing is a cog in America’s uniquely punitive criminal justice machinery: Legislatures write tougher laws, police make more arrests, prosecutors bring more charges, and courts imprison far more people for longer terms under worse conditions than do authorities in any other affluent democracy. Police are also the public face of this renegade system. Millions of Americans have contact with the police every year, and even after successive waves of protest and civil unrest against police brutality, policing is still often intrusive, abusive, and sometimes gratuitously violent, especially in black and low-income neighborhoods.

If we think that these maladies are invariable and immutable expressions of an American system founded on settler colonialism and slavery, or if we believe on principle that coercion is bad and that the state has no “right” to coerce compliance with laws, then our course of action will be clear: we should steel ourselves with moral zeal and take up the cause to defund, dismantle, and abolish policing.18 But if we understand that these collective disorders represent a contingent fact of history—a modern shift of institutional logics that was gestated in the turmoil of the 1960s, born in the political retrenchment of the 1970s, and persists, albeit in increasingly attenuated modalities, today19—then we might begin the work of unpacking the bundle of associations, of bringing American law enforcement practices into alignment with constitutional protections, evolving international human rights norms, and rising standards of accountability.

The latter approach offers a richer and subtler view of history, to say nothing of having the advantage of being informed by a coherent comparative sociology. Policing, which exists in every modern society, can scarcely be traced to the slave patrols lore commonly circulated among abolitionists. Although it has plural (and often bloodstained) roots in the protection of private property, strikebreaking, sexual regulation, and the maintenance of race, ethnic, and class hierarchies, policing’s modern implantment in rationales of public safety represents a civilizational advance over private protection rackets and archaic forms of communal violence including lynch mobs, kinship-based self-defense, feuds, vendettas, and so on. It is part of an apparatus that inserts delays, rules, and deliberations in between accusation, apprehension, adjudication, and penalty. Its means of coercion are not intrinsically unjust or abusive. A socialist ought to be able to hold these opposed thoughts in his or her head at the same time.

Calls to defund, shrink, and ultimately abolish20 the police misdiagnose the problem with American policing and prescribe a course likely to make things worse, not better.

Bernie Sanders’ recent refusal to embrace demands to defund and abolish policing (demands that tacitly accept the limits of austerity budgets) has drawn hoots and catcalls from the cancel culture activists of Twitterverse and Leftbook. Accustomed to circulating arcane terms amongst small groups of insiders, some have couched their counsel in inventive definitions of what the term “defund” might mean. Libertarians, at least, are honest about words and understand what they’re saying when they call for defunding: they want to privatize policing and put all security arrangements on the marketplace. Bernie’s position, by contrast, views security as a public good. This approach has the advantage of aligning with public opinion, which acknowledges racist enforcement, supports reform, and—across all race/ethnic groups—strongly opposes defunding. It also resonates with Colin Kaepernick’s point about underfunding and undertraining: “You can become a cop in six months and don’t have to have the same amount of training as a cosmetologist. That’s insane.” (By contrast, Northern European police typically receive 2 to 3 years of training, including extensive coursework in social sciences, human relations, and psychology—with emphasis on conflict resolution and crisis management.)

Embracing the urgent need for radical reform, Sanders also makes his commitment to a welfarist version of public security clear: “Do I think we should not have police departments in America? No, I don’t. There’s no city in the world that does not have police departments.” The democratic socialist elaborates: “I called for police departments that have well-educated, well-trained, well-paid professionals. And, too often around this country right now, you have police officers who take the job at very low payment, don’t have much education, don’t have much training—and I want to change that.” He continues, envisioning a much wider role for social services, as distinct from policing: “[M]any police departments and cops deal every day with issues of mental illness, deal with issues of addiction, and all kinds of issues which should be dealt with by mental health professionals or others, and not just by police officers.”

The call to defund or abolish the police is a gift to the right. We need instead a series of radical reforms along with enhanced training, closer supervision, and democratic accountability. We should be looking to models that work rather than engaging in fantasies about civil patrols and communal policing, which will ultimately mean an expansion of private guard labor and private policing, unaccountable to public oversight. 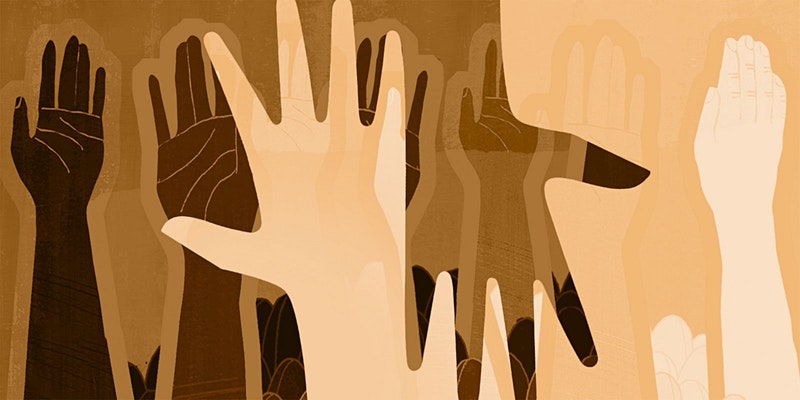 Checking Your Privilege? Perspectives on the Politics of White Identity